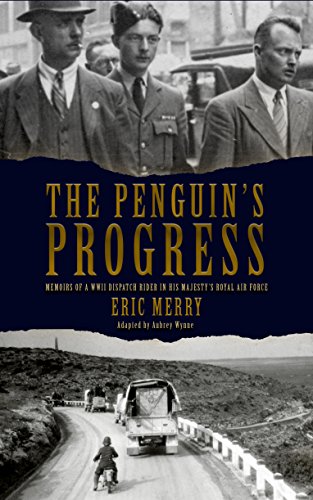 These memoirs are also located in the London Imperial War Museum. This must be one of the most interesting non-fiction books I’ve edited.

A young man sat on Biggin Hill in early 1940, watching an attack on the R.A.F. fighter station. As a German bomber spun out, chased by a British Spitfire, Eric knew what he wanted to do. The day he turned 18, he volunteered at the Air Ministry in Kingsway, London. Raised in a military family, his Marine father was disappointed with his choice. But both father and son served their country with stubborn courage that brought them both back home safely in 1946.
When Eric was passed over for pilot, he was designated an air gunner. When he was later assigned as a dispatch rider, he adopted the mascot of a penguin, the flightless bird. His dogged determination kept him going through countless conflicts and close calls across North Africa and Italy. His amiable character and optimism secured friendships that would last a lifetime. These are the memoirs of Eric Thomas Merry, a dispatch rider for His Majesty’s Air Force.
These accounts are also part of the Imperial War Museum’s archives in London, England. Illustrations and photographs taken during wartime and by Eric are included in the book.

Amazon     All other retailers